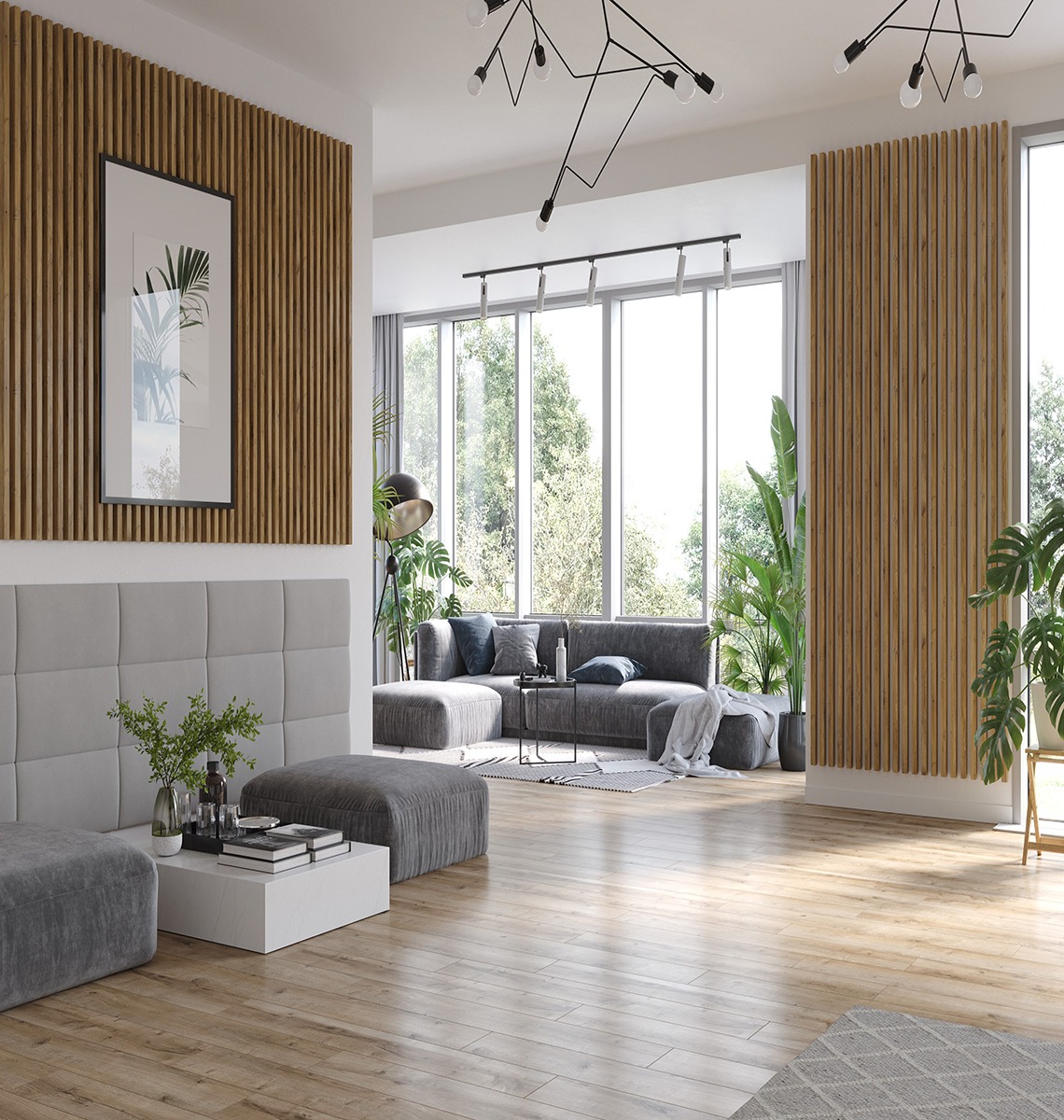 What are Decorative Lamellas?

Lamellas are long and narrow elements installed on a wall or ceiling as a kind of 3D decoration. You can use them as an openwork partition between rooms or different functional areas in open spaces.

The most popular are narrow slats with texture imitating natural wood, which look like vertical, horizontal or angled scantlings or small boards. The lovers of intense color splashes can also go for slats in different colors and finishes, including matte black.

How is a decorative wall lamella constructed?

A lamella usually consists of two elements. One of them is a concealed mounting strip. It’s placed on a wall with the use of screws or a mounting adhesive or sometimes attached to a laminated board. The proper slat is a U-shaped profile installed on the mounting strip.

The lamellas may be made of wood (oak or ash are popular choices). The most popular solution, though, is a slat made of MDF board covered with a veneer of any color – it’s usually a color and texture of wood.

Another option are openwork slats. They are used as a partition wall between the hall and the sitting room or a kitchenette and a living room. These are mounted to the floor and the ceiling.

Why are lamellas so popular in interior design?

It’s because they transform every design into a more modern and dynamic one as well as add depth, which increases the space visually. They also introduce the now fashionable nature to the apartment. They’re a strong decorative accent, quick and easy to install without any special preparations (all you need to do is paint the wall).

How can you use decorative lamellas in interior design?

1. Decorative lamellas on the TV wall

The TV wall is usually the focal point of the living room. It’s the first one you see after entering, so no wonder it’s usually the most representative surface. The WOW effect is definitely welcome here! It can be achieved with vertical slats.

If you want a spectacular TV wall decoration, install the lamellas across the entire width of the wall and hang the TV on them. Another option is two smaller lamellas accents at the opposite sides of the TV. You can also make the design more dynamic by placing the lamellas in the middle of the wall. What color slats should you choose? Natural oak or ash are pretty versatile solutions.

2. Decorative lamellas on the wall and the ceiling or only on the ceiling

If you’re aiming at a unique minimalist or jacanid design, using lamellas on a major part of the surface of your open living space may be an interesting idea. The first possibility is to install the decorative lamellas on the wall and the ceiling. This way you can highlight one of the functional areas, such as a dining room. 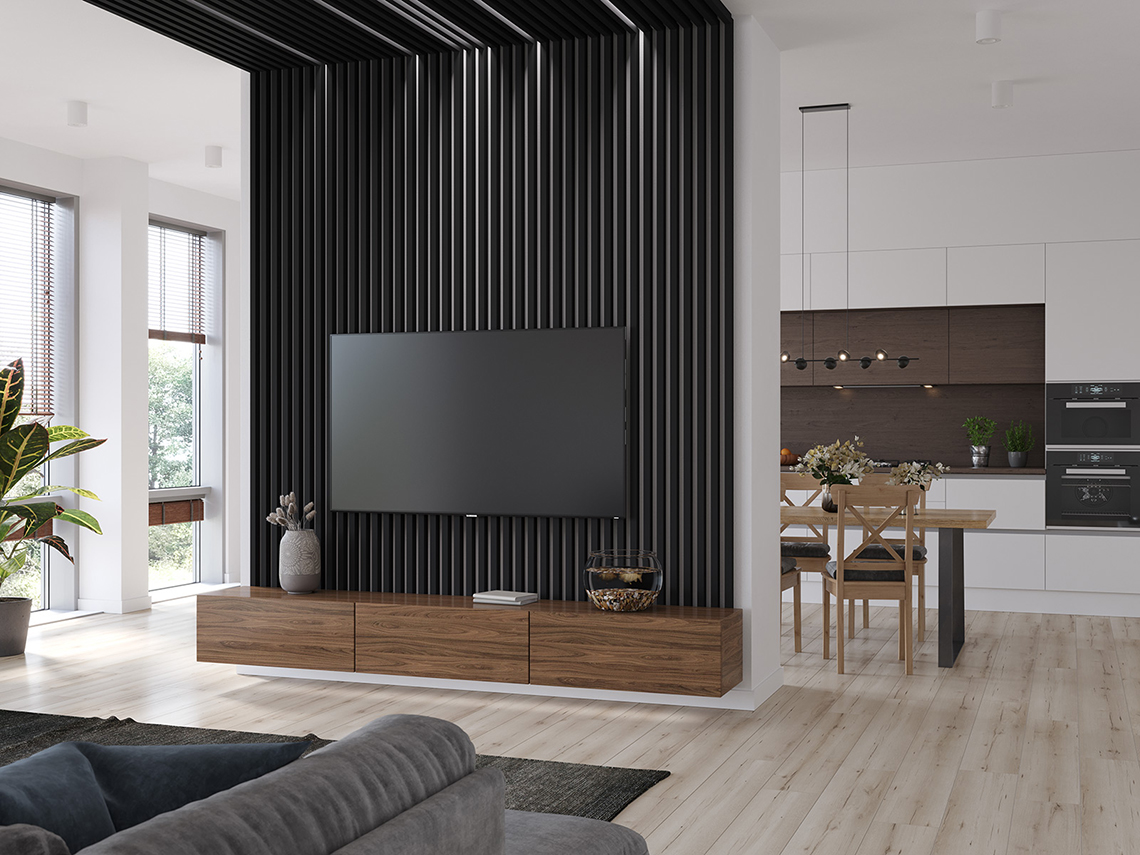 Another interesting design idea is to use lamellas to decorate the ceiling. There’s a reason the ceiling is called the ‘fifth wall’ – it’s a surface that can be fully integrated in the interior design.

When is it best to use this kind of ceiling finish? When you have a large open space and an oversized room height (2.7 or more). In an apartment with a ‘regular’ height ceiling (for example 2.5 m), slats will visually lower and shrink the room.

3. Decorative lamellas in the hall

An entrance to a house or apartment is, despite appearances, a very demanding space. It usually has a very limited footprint, so there’s little possibility to create an interesting design. In addition, it’s a very busy space – food traffic is high, it’s easy to damage or soil the walls with shoes, backpacks and bags, especially if the house is ruled by children.

How to arrange an interesting and modern entrance? Again, we’re going to need wooden lamellas. If you put them on a wall in a narrow hallway, you’ll get a trendy, designer decoration, which won’t reduce the valuable surface. 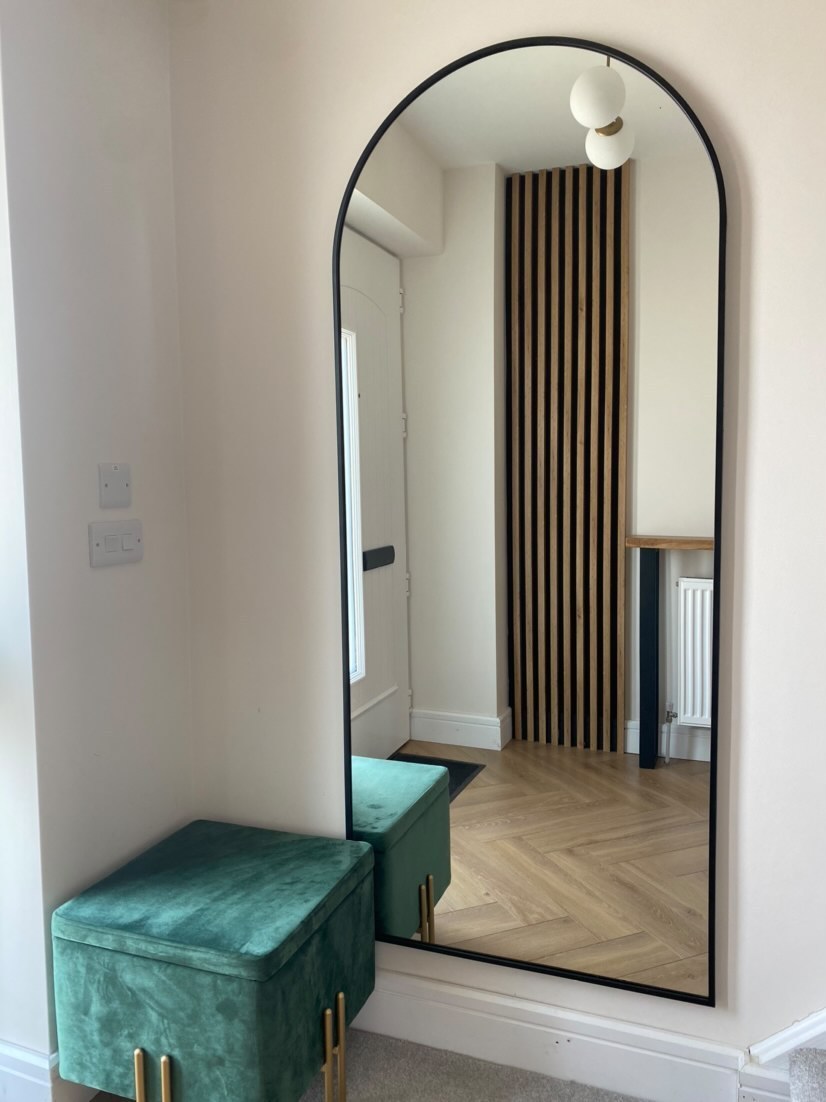 Decorative lamellas are also perfect as a partition between the entrance and the sitting room. It’s a great idea especially in apartment blocks, where halls aren’t designed as separate rooms. You can also try to install a built-in set with an upholstered seating at the bottom and openwork lamellas at the top.

4. Decorative lamellas between the living room and the kitchenette

An open living space that merges a living room, kitchen and dining room is a very popular solution especially in new buildings.

A kitchenette has many advantages. It allows you to save space and use it for an additional bedroom or children’s room instead of a closed kitchen. It comes with its disadvantages, though. The biggest challenge is to separate it from the open living space. In this case, slats are a modern idea for a partition wall.

5. Decorative lamellas on the wall over the bed in the bedroom

Just like the TV wall in the living room, the focal point that attracts most attention in the bedroom is the bed wall. How to finish it in a fashionable way without a complete renovation? Just install decorative lamellas on it.

This decoration doesn’t need any competition! Put an upholstered or wooden bed, take care of the storage space and your beautiful, trendy bedroom is ready. 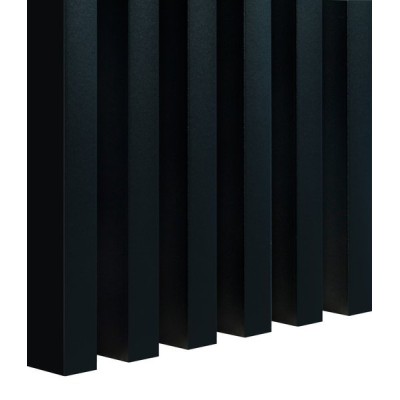 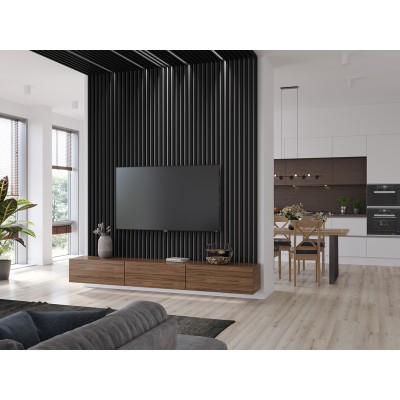 LM006
€12.99
Decorative strips (lamellas) are product with a wide range of applications – for mounting on wall, ceiling or as a translucent partition separating part of the space. The moldings create the overall finish for a given surface in the interior. FINISHING: Made of high-quality MDF Plus board, it guarantees the product & long-term use LAMELLA... 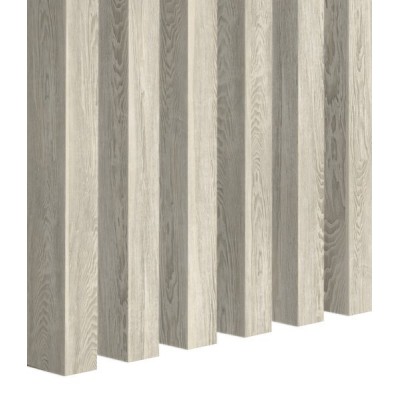 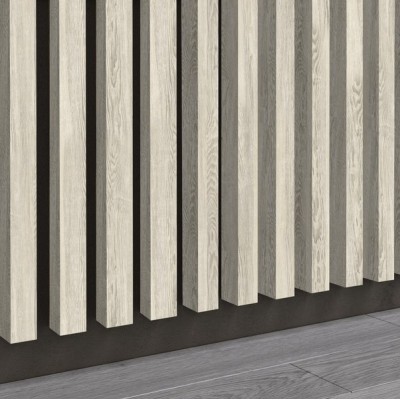 LM011
€12.99
Decorative strips (lamellas) are product with a wide range of applications – for mounting on wall, ceiling or as a translucent partition separating part of the space. The moldings create the overall finish for a given surface in the interior. FINISHING: Made of high-quality MDF Plus board, it guarantees the product & long-term use LAMELLA... 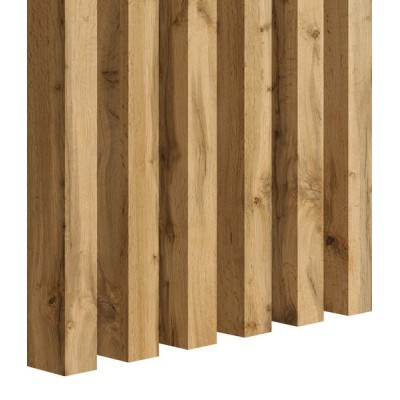 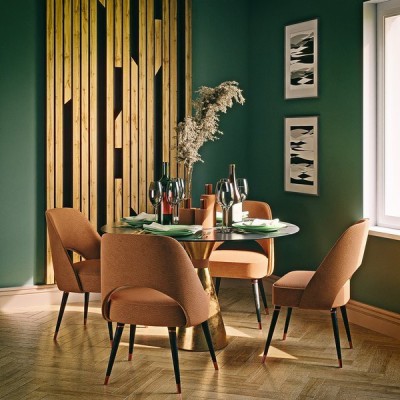 LM019
€12.99
Decorative strips (lamellas) are product with a wide range of applications – for mounting on wall, ceiling or as a translucent partition separating part of the space. The moldings create the overall finish for a given surface in the interior. FINISHING: Made of high-quality MDF Plus board, it guarantees the product & long-term use LAMELLA... 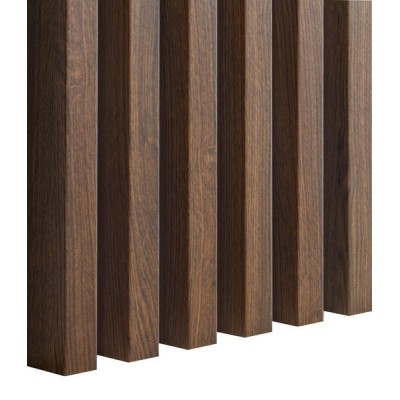 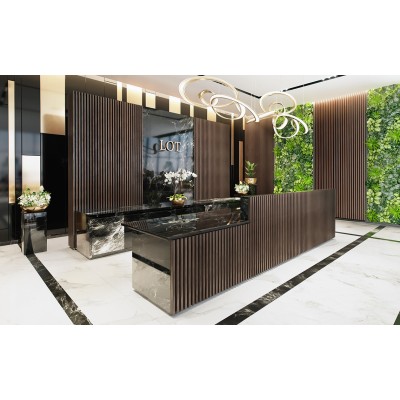 LM035
€12.99
Decorative strips (lamellas) are product with a wide range of applications – for mounting on wall, ceiling or as a translucent partition separating part of the space. The moldings create the overall finish for a given surface in the interior. FINISHING: Made of high-quality MDF Plus board, it guarantees the product & long-term use LAMELLA...